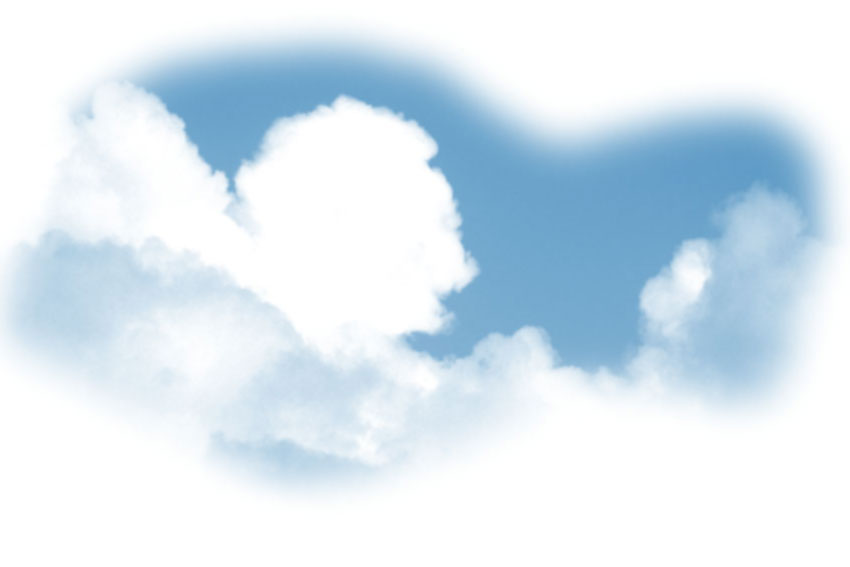 The Art of Physical Space 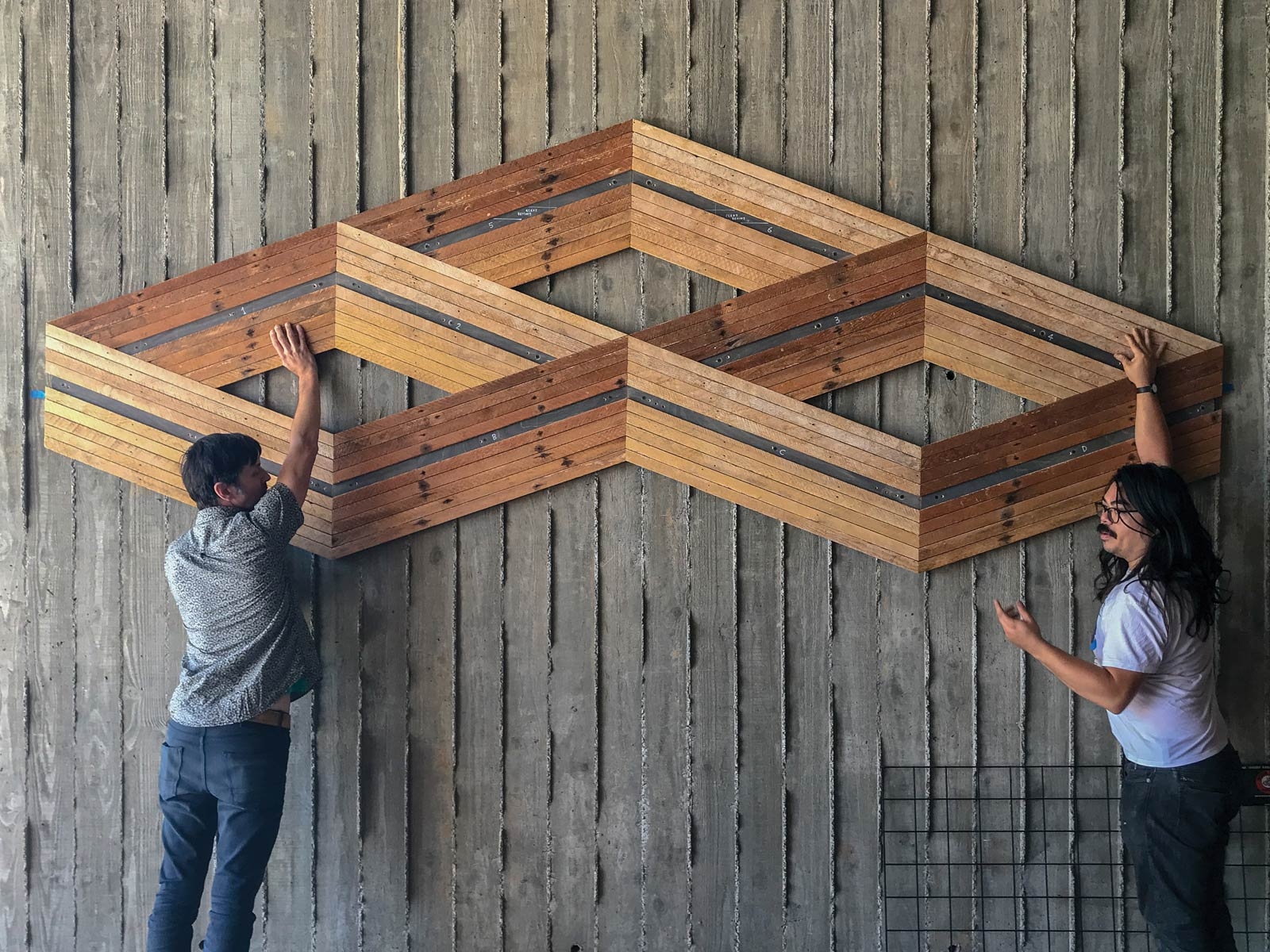 Sculpture is where art jumps off the page and into the third dimension. Within our three hotels, you may have already felt that impact from these three artists whose work grace our halls and open spaces. But to truly understand the art form, we got into their head spaces, workshops, and daily rituals that all culminate in bringing meaning to physical space. 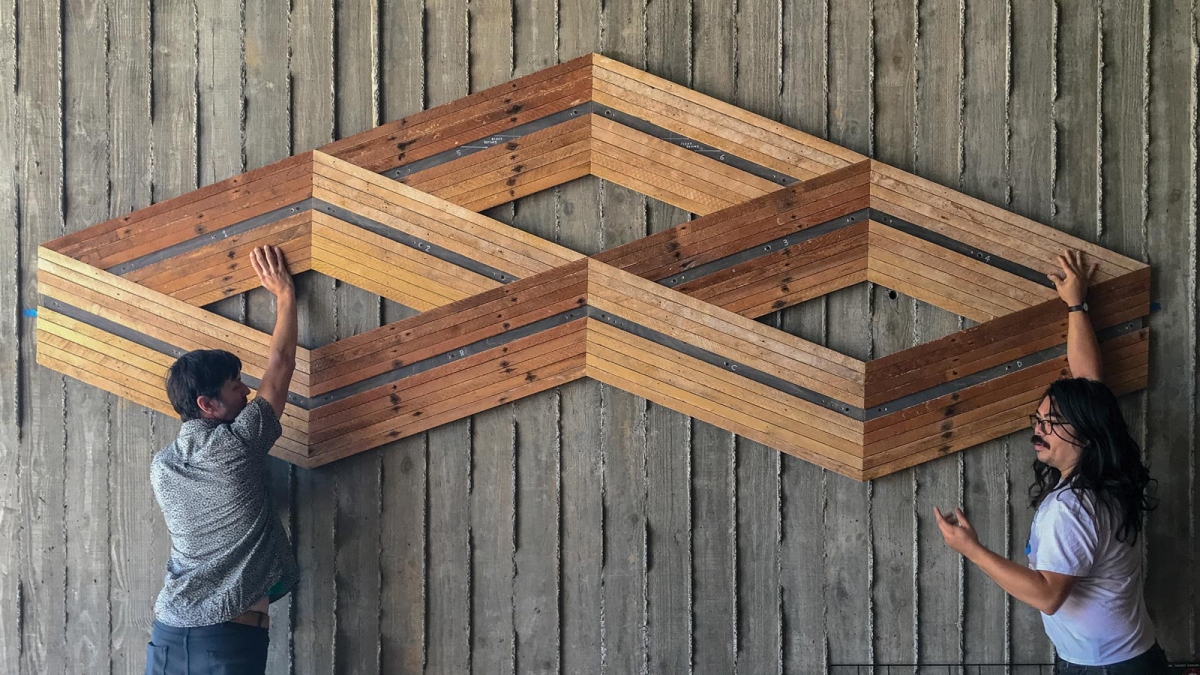 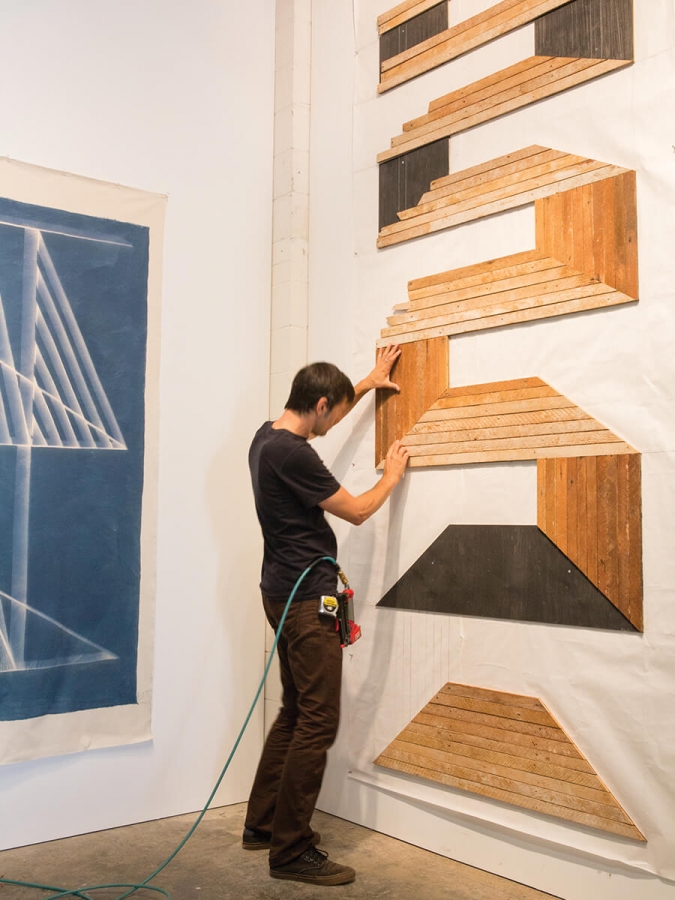 Vogt uses miscellaneous items to form and shape different woods
Aesthetic
Installations from salvaged architectural building materials in conjunction with light and collage
Common Mediums
Salvaged wood from demolished buildings, bronze
Within HGH
Carriage wall at the main entrance
Andy Vogt arrived in San Francisco in 2000, just as the dot.com bubble was bursting and old buildings were being torn down or renovated everywhere. The destruction resulted in dumpsters full of discarded lath – the narrow strips of wood used to hold plaster onto wall studs – a humble material that became Vogt’s primary, surprisingly versatile medium. He pieces the strips together almost like marquetry or mosaic, using their natural tones of light and dark to make gradations of color and shading. His work alludes to time, history, and geography: The boards he uses come from late nineteenth and early twentieth-century buildings and are typically made of Douglas fir, an old-growth tree native to the northern West Coast, so some of the wood in his pieces is nearly 800 years old. 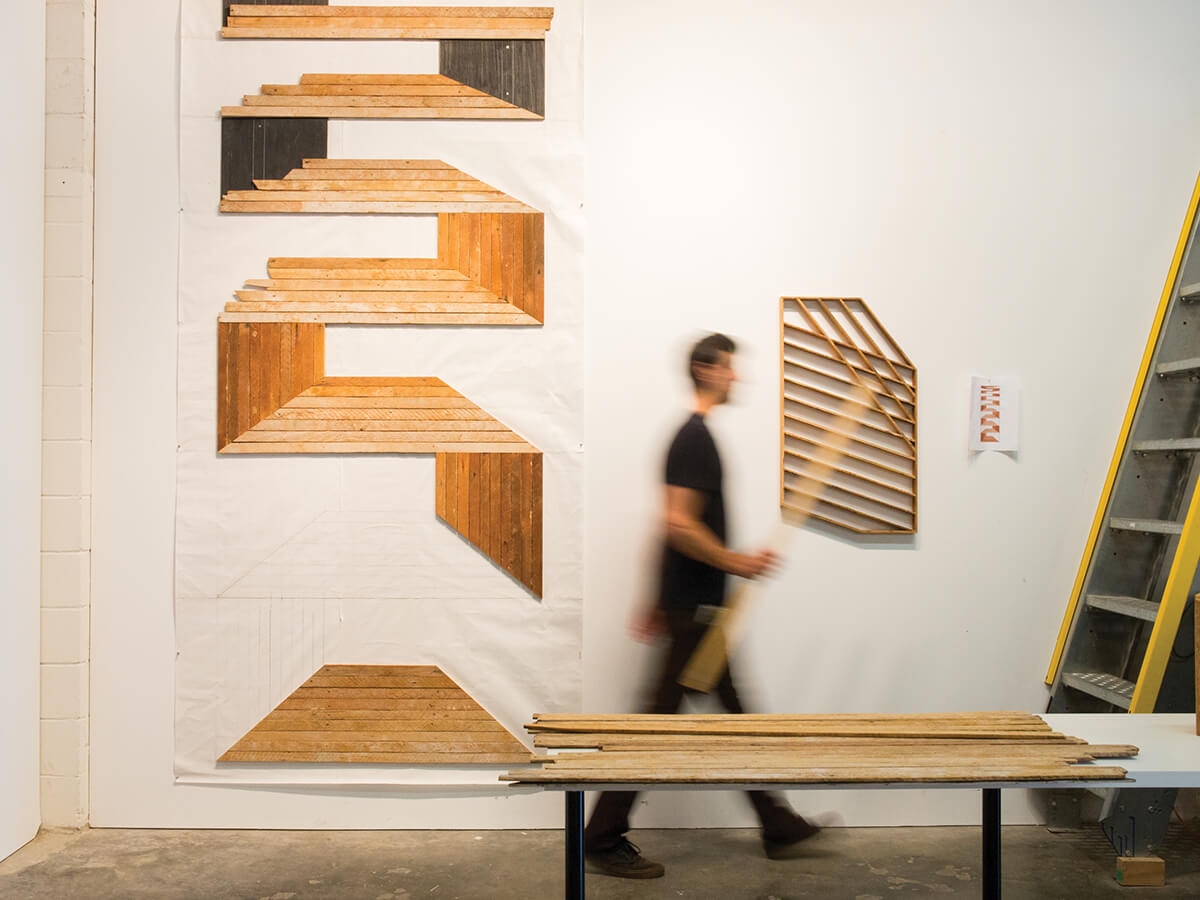 In his west-facing fourth-floor studio, the strong afternoon sun helps Vogt consider the effect of light in his sculptural process
The Creative Space
“My studio is a big garage shop in Bayview, San Francisco, one block from the old Hunters Point Navy Yard, that I share with a couple of other artists. There are all kinds of tools around, and piles of bundled lath organized by color. I’m constantly sorting through them, looking for the right colors and the right lengths for a particular project. Sometimes it’s like looking for a needle in a haystack.
My “9-5”
“When I approach a commission, I come up with general sketches first, hand drawn on paper. Every space is different, and there’s always something about the space that I want to respond to. For me, one of the most interesting parts is looking at the material I’ll use and thinking about the houses and rooms and architecture that start out as drawings. When it’s torn down, it’s like erasing the drawings, and then I’m taking it and redrawing it.”
The Process
“While I work I’ll usually listen to NPR, or instrumental music when I want to think without people talking – electronic or dub, something mellow. I still play a lot of my old cassette tapes with mixes my friends made for me back in college, or I’ll listen to college radio online, like KALX or WNYU.” 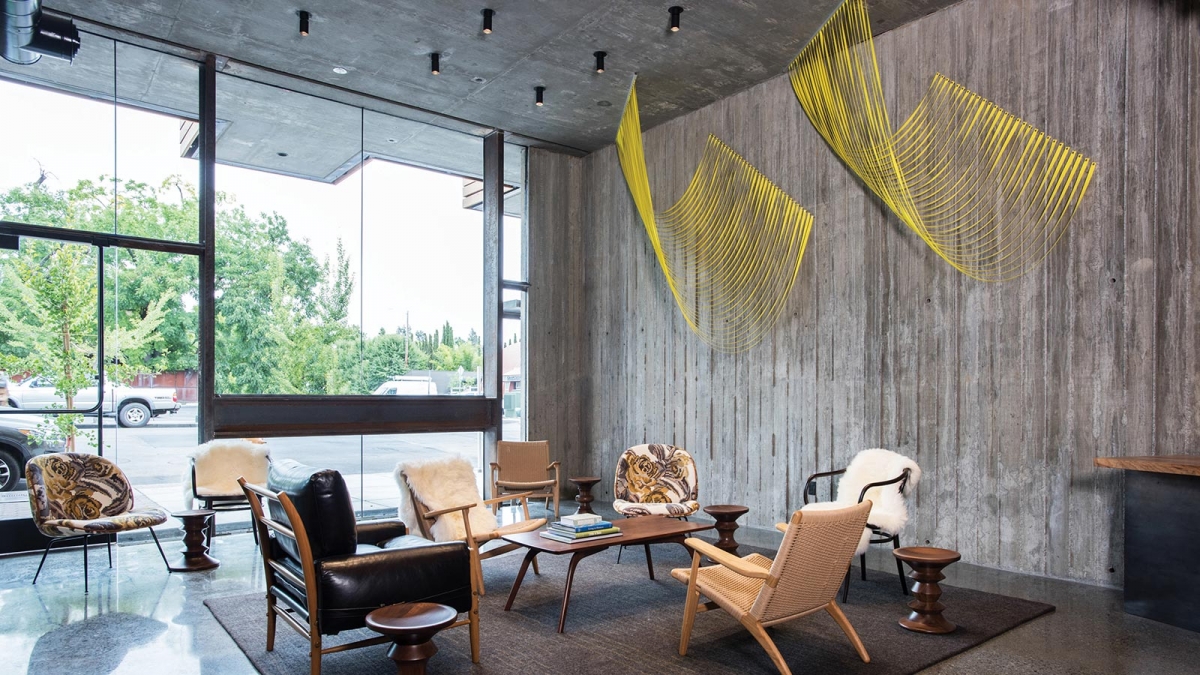 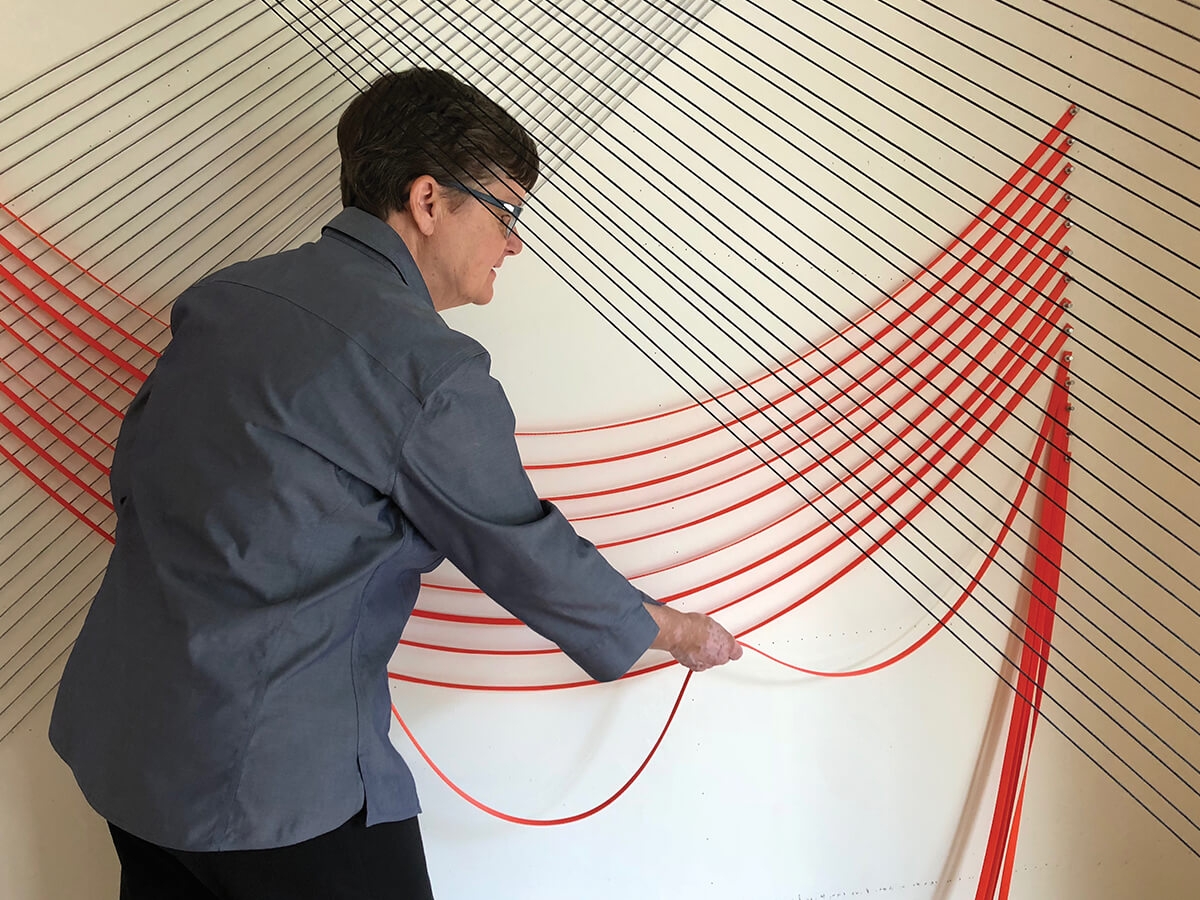 The use of soft and pliable linear materials of varying widths such as ribbons, ropes, and tapes give each installation its own complex personality
Aesthetic
Three-dimensional room-sized installations that, from a distance, appear as a distinct shape but up close dissolve into linear patterns
Common Mediums
Yarn, nylon cord, ribbon
Within HGH
Lobby
Sabine Reckewell’s work is at once hard and soft, linear and curvaceous – a balance between archetypally masculine and feminine qualities. She works with gravity and geometry to “make mathematical ideas visible,” she says. Reckewell, a native of Germany, and her husband, artist Stephen Whisler, relocated to Napa in 2007 from New York City, where they raised their daughter and ran a store and workshop in Tribeca. While unpacking, Reckewell came across installations she had done in the late ’70s. On a lark, she began re-creating them – and happened to discovered new evolutions and directions in the process. 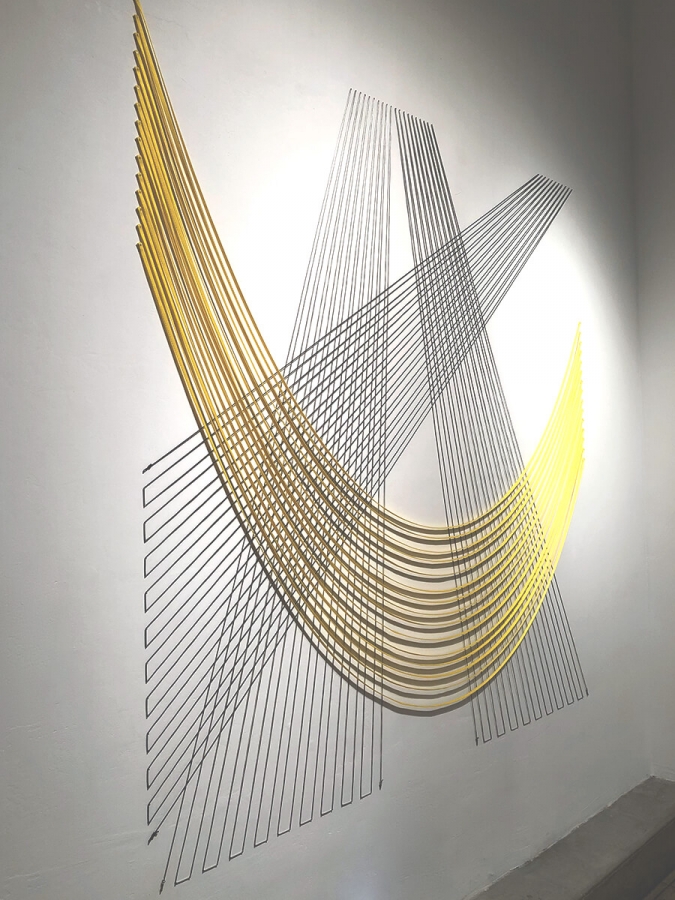 Reckewell’s first consideration when creating in a new space is how to take advantage of its walls, floor, ceiling, and lighting
The Creative Space
“My studio is a large, L-shaped room in our home, with eight-foot ceilings and white walls. It’s empty except for a drawing table, and there are works in progress hanging in all the corners. A lot of my installations are made for corners, because the lines are either stretched tightly between two points, or suspended loosely between two points, and gravity creates natural curves in the material. I start by making a drawing, and then I usually build a half-scale model before creating the full-size piece.”
My “9-5”
“I’ll go into the studio around 10, work for a couple hours, and then take a lunch break with my husband. His studio is in the garage, so I might take a look at what he’s working on and vice versa. We don’t tread on each other’s territory at all [in terms of content] – his work is more confrontational and political. Then I’ll go back into the studio till around 5, or longer if I’m on a deadline. I’ve always loved working at home and having my work integrated with the rest of my life.”
Installation Inspiration
“With site-specific works, I’m inspired by the architecture that I’m asked to work with, the particular space that it needs to fit into. At the Harmon Guest House, the challenge was that the entire space was made out of concrete – the floors, the ceilings, the walls – and I needed to find just the right color to go with that battleship gray. It had to be a color that really popped and captured the light.” 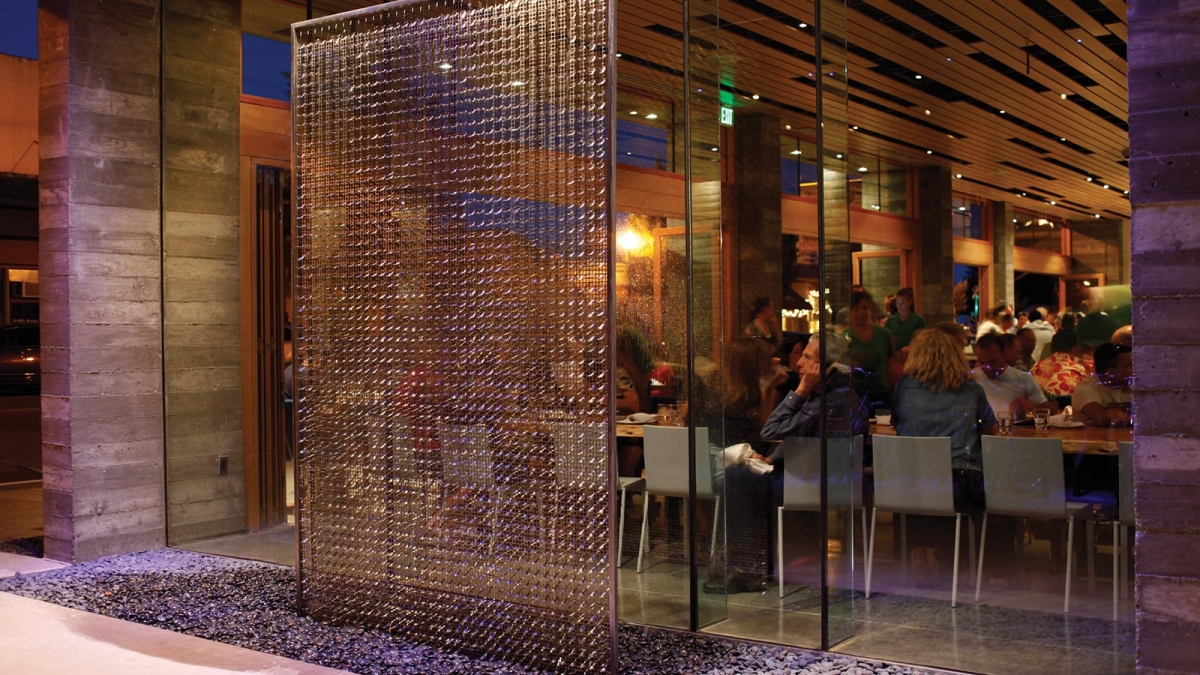 Kahn’s piece Spoonfall sees 2,000 modified espresso spoons fill with water and spill over into the next, mesmerizing many in the lobby of h2hotel 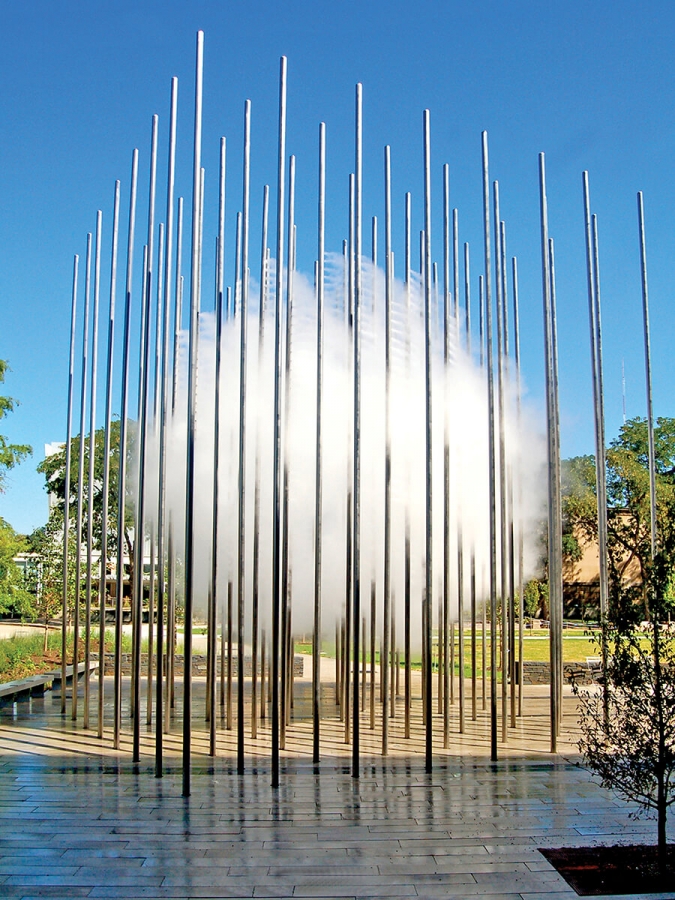 Kahn uses his ingenuity to use natural elements like water, fire, and wind as players in large-scale installations
Aesthetic
Large-scale
installations making invisible elements
of nature visible through facades
and patterns
Common Mediums
Wind, water, fire, stainless steel espresso spoons
Within h2 Hotel
Lobby entrance
Ned Kahn grew up wanting to be a scientist – until he worked in a lab at college and realized he loved the ideas and metaphors of science more than the actual work. Today, he uses art to harness the elements and capture the mystery of the world around us – science in the form of art. His installations are inspired by the principles of physics, geology, astronomy, and fluid motion – tornado-like funnels of whirling fog or sand; canopies constructed with thousands of stainless steel discs that shiver and rustle in the wind; a “skin” of plastic squares whose optical qualities change with the weather and time of day.
The Creative Space
“My ‘studio’ is a gantry structure [an open-air, bridge-like overhead] with a large outdoor space in Santa Rosa where we can test things, because a lot of my pieces are wind-animated. I also have a workshop at home, with an office and a drawing studio. My house is on a windy hillside near the ocean, so I use it as part of my testing ground.” 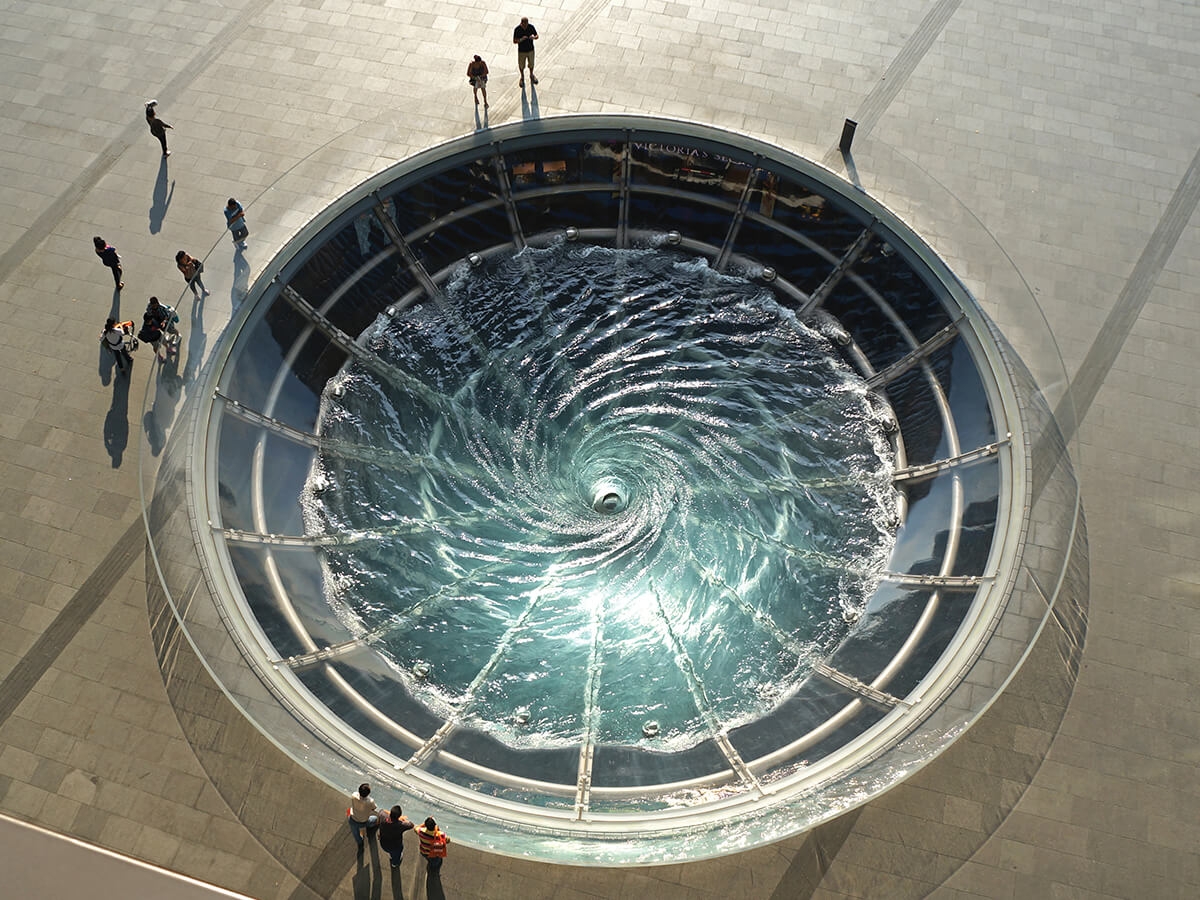 In Singapore, Kahn’s 2011 Rain Oculus functions both as a skylight and a rain collector
Installation Inspiration
“I’ve been experimenting with this super-clear, indestructible plastic that’s paper-thin but looks like glass. The company in Japan that makes it sent me some samples and I’ve been cutting it up and using it differently. The company was so intrigued with what I was doing that three of them flew over from Japan to visit the workshop.”
My “9-5”
“I actually work from 9 to 5, but I frequently wake up in the middle of the night or very early in the morning and work for a couple of hours on the computer. I have a nonlinear work schedule. And I have a 4-year-old, so sometimes when I’m working at home, he’ll come and take my mouse away and say, ‘You’re all done, Daddy.’”
The Process
“I’m constantly inventing new technologies and going into uncharted territory, and that means there’s a lot of failure involved. For everything I’ve finished, you don’t see the 10 other things that led up to it. I use the analogy of scaffolding – you have to build the scaffolding to make the building, and then you take it down. One thing leads to another, and each one helps me find a more elegant solution.” 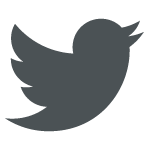